As some of you may know, a couple of weeks ago our website went down for a couple of hours. The cause was a technical upgrade issue that prevented our eCommerce platform code from functioning. Our hosting provider was good enough to address the issue pretty soon after it was discovered. They did not indicate whether this was a permanent fix or not, but based on the discussion, we assumed this was just a short term fix to get us by until we could address the issue in a more permanent way. (Is there anything “permanent” when it comes to software??) Anyway, in an effort to reduce the chance of that happening in the foreseeable future, we decided to engage in an effort to migrate our current webstore to a newer, better maintained eCommerce system. We knew this wasn’t going to be easy, but this transition is probably the best course of action and although it requires a tremendous amount of development effort to ensure the transition is as smooth as possible, we believe it will also improve overall site performance. At least that’s what we’re being told anyway. That said, we are getting closer to actually completing that migration and anticipate announcing this weekend that we will be making the live “switch” sometime next week. Once that event has been scheduled – we’ll post more here. 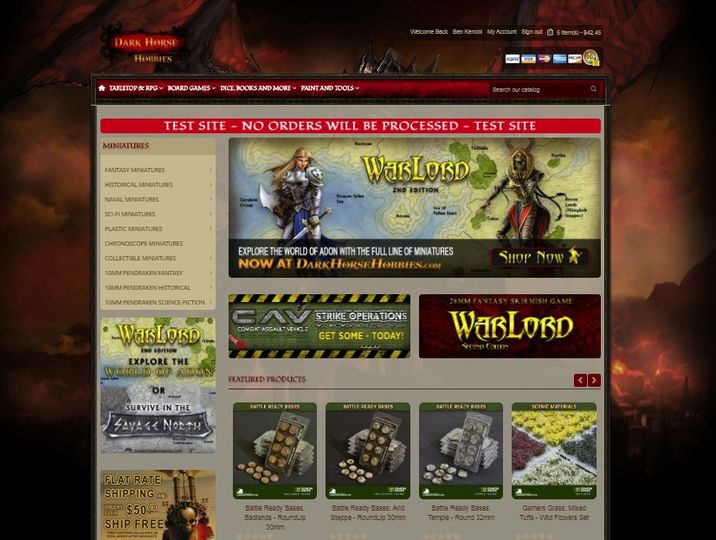 (Yes, the image is of the new site – still under construction – and no, we really aren’t changing the theme at this time.)

We have two major modules to our website to rewrite code for and we have about 7 million records in the database to build a migration script for. We left out all of the tracking and customer information in the first test migration so considerably more data will transfer to the new database to complete the migration.

This is definitely NOT what we had planned for the first quarter of this year, but then again, getting hit simultaneously with a change in PayPal shipping providers is costing us alot more money as well given their new platform won’t support our existing hardware. Still negotiating on that issue with PayPal… we’re not holding our breath and looking for alternate options that provide as cost effective a solution as we had originally – which allowed us to retain our $8.99 flat rate shipping at the New Year – hopefully we can find a solution that keeps us in that ballpark. Our least expensive package that has gone out since PayPal’s shipping change has cost us $9.85 for a 4oz package via Priority Mail.

==================================
FOLLOWUP – 4/12/2022
==================================
The transition did not go as promised – the new upgraded theme engine (required for the new platform) apparently uses an unreliable method to handle images, so nothing was ever consistent, even when viewing over a period of a few days from the same machine. This appeared to be fixed on the test server, but once it was migrated to the production server, the original problems resurfaced and nothing seemed to resolve the problem. There were a few other issues that we might have worked through, but given how graphic intensive or site is, this issue was simply a non-starter. We are waiting to hear back from our hosting provider to see if there is some other service upgrade possibilities that don’t cost an arm-and-a-leg along with a first-born, but nothing solid has been offered to date. The bottom line is that we will continue to run on the platform we are on until further notice.

As for the shipping issues – that too is an unresolved dead-end. Not sure why we believed that PayPal would somehow work something out for folks who have invested in hardware and software that’s still perfectly capable of functioning securely without any glitches. The PirateShip and ShipStations of the planet want to put their hands too deep into our pockets, so we’ve switched over to the OLD way that we did shipping labels – on a laser printer – until we can work something out. One would think all these “green” companies would want us to keep using our old equipment as long as it worked instead of sending it to the landfills, but hey – we still recycle as much packing material as we can – so at least there is that!

News from the Dark Horse

Theme by Anders Noren — Up ↑